No matter who you are, we all love having a dog as best friend.

With their waggy tails, wet noses and furry paws, there are so many things we love about our four-legged friends. Whether you are rich or poor, famous or unknown, our furry friends can really benefit our lives in a humungous amount of ways. So when it comes to the most important lady in Britain, what is it that makes her pair of prized paws so great she cannot bear to be without them?

Who might we be talking about? Well, it’s the Queen and her corgis of course! With the traditional Trooping the Colour Celebration for the Queen's birthday taking place on a smaller scale today, to fall in line with government advice, we thought we’d dedicate this blog post as to why the Royal Corgi’s are some of the most important parts of the royal family.

History of the Corgis Princess Elizabeth sitting on a garden seat with two corgi dogs at her home on 145 Piccadilly, London, July 01, 1936

As one of the most famous dog breeds on earth, the ‘corgi’ has become synonymous with the Royal Family. Owned by her majesty and her parents, Queen Elizabeth II has been a firm lover of corgis since she was a small child.

No matter when or where she travelled, the dogs accompanied the Queen on every single one of her travels. Whether it be by train, plane or car, her corgis were there every step of the way. She has been known to let them roam free around the royal residence where she has resided in at that time, making them some of the most royal pets history has ever known!

It was her Majesty’s mother who introduced a disciplined regimen for the dogs; each was to have its own wicker basket, raised above the floor to avoid drafts. Meals were served for each dog in its own dish, the diet approved by veterinary experts with no leftovers from the royal table. However, as the years progressed their diets became more and more ‘royal’ with professional chefs preparing foods such as game and rabbit specifically for the corgis. Talk about the royal treatment!

Why we love the Corgis 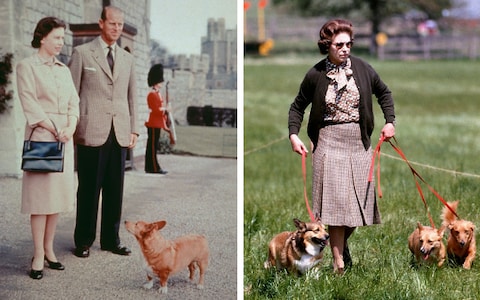 (Left) Queen Elizabeth II and Prince Philip with one of their corgis at Windsor Castlepictured in 1959 / (Right) Her Majesty walking her dogs in 1980.

With their squishy bodies and tiny legs, it is no wonder the nation and the world have gone barking mad for these tiny pooches. Known for, on numerous occasions, causing chaos in the royal residence has kept us amused since their introduction in the 20th Century.

Being close companions to her royal highness for many, many years, sales in Corgis have increased across the world. From their pawfect personalities to beyond amazing appearance, they are the epitome of what makes Britain great and we love them!

Her Love of Corgis 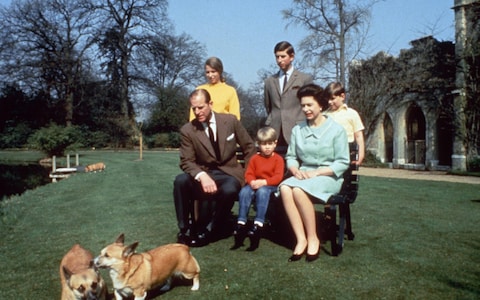 The Queen has been a firm lover of the corgi breed since a young age. Having fallen in love with corgis owned by the children of Marquess of Bath, her majesty has owned at least one corgi from the years 1933-2018. Early photographs of her majesty’s childhood showcases her love for the family dogs showing a ten-year Princess Elizabeth with her first Corgi, Dookie, at Balmoral who would often be fed by hand by Elizabeth and Margaret during their childhood years.

Since then, her majesty’s love for corgi’s has grown and grown as over 30 corgi gracing the palace floors since her coronation in 1953, corgis have become the canine symbol of Buckingham Palace for many, many years. In 2007, the Queen owned five corgis: Monty, Emma, Linnet, Willow, and Holly; five cocker spaniels: Bisto, Oxo, Flash, Spick, and Span; and four dorgis (dachshund-corgi crossbreeds): Cider, Berry, Vulcan, and Candy.

End of the Corgi Reign Shortly after her 93rd birthday, The Queen made a major decision in regards to Corgi breeding in the royal family. Not wanting any corgi’s to live alone past her death, in 2015, Elizabeth II made a decision not to breed any more Corgi’s in Buckingham Palace. A sad day for the royal corgi world, but we can all empathise with her majesty’s decision. Being her primary love for the past 80 years, it is no wonder her love for her four-legged friends supersedes her need to spread the corgi love.

Three years later, the world of the royal corgi’s hit all time low with the passing of her majesty’s final corgi, Willow, in April 2018. Outlived by her crossbreeds, Vulcan and Candy, the death of Willow marks the official end of the thoroughbred reign of Corgis in the Royal Family. A sad day for them and an even sadder day for us. So with the last morsel of Corginess still prancing around the palace, our Corgi love goes out to Candy and Vulcan, who keep the Royal Corgi candle burning for us!

We want to raise a glass to her majesty and her fabulous corgi’s, wishing her the best birthday wishes, and hope her four-legged friends give her all the birthday fun she needs to celebrate in the most royal way!